“If you would’ve asked me in March 2020 if I’d ever be supporting my way through residency with a TikTok account, I’d call you crazy,” said Tim Bitner, DDS. But the resident in orthodontics is doing just that: and the same fine hand skills that propelled his dental career are fueling his success as the viral Mr. Rice Guy on TikTok.

It all started in the early days of the pandemic. Bitner, his wife, and his kids were settling into isolation in Utah, where they and both sets of parents lived. He dreamed up a fun idea involving his eight siblings passing a cup of water through the screen on a Zoom call to one another. They filmed it, and his sister asked if she could put it on her TikTok. 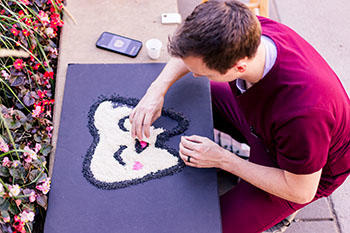 Sure, Bitner thought, not really knowing what a TikTok was. The video, now reposted on his page, got over one million views.

“I was like, you’re kidding me,” he said, knowing his little sister was getting all those views from his idea. “There was a bit of competitiveness there.”

After accepting the challenge from his family, Bitner dedicated himself to making a video that got more views. He tried a few avenues before seeing someone write out a word with rice and throw it. In that video, he saw his opening.

“I’ve always been pretty artistic,” Bitner explained. So he knew he could make a pretty incredible picture--and his wife, Carly, had the perfect recipe for dyeing rice with vibrant colors.

They started by designing and throwing a portrait of Bob Marley made of rice on May 23 of last year. “Everybody knows Bob Marley,” he explained, so it’d make for a great start. He got six million views.

“My goal was reached,” he said. “I’d beat my little sister. I did what I wanted to do.” But then, he started getting requests, including from big names like the Houston Rockets and Marshmello, a popular DJ. “It just rolled so fast,” he said.

By October, Bitner had one million followers on his account. He started getting requests for partnerships from brands like the NHL, M&M’s, Disney-Pixar, My Little Pony, and Dunkin’ Donuts. Just like that, the account went from a fun hobby to a way of supporting himself and his family during dental school and orthodontic residency. 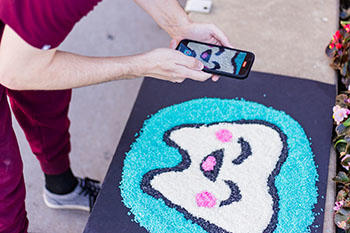 “Before, my wife has always been the one to work while I’m in school,” he explained, “but we have three kids now, and this has been heaven sent. ”

Instead of taking time away from his studies and his work, the rice throwing helps him focus on work and on raising his family without additional financial strain. And the portraits fit with his view of dentistry, too.

“It was actually an interest in ceramics and sculpting that got me into dentistry,” said Bitner, who’s always enjoyed art.

It was that passion for fine-detailed, hands-on work like painting and carving that spurred an interest in dentistry in general and orthodontics in particular. “You’re focused on aesthetics, improving a smile and using your hands for wire detail.”

The rice throwing keeps that interest piqued, and keeps Bitner sharp. “As a dentist, you’re always going to be stretching what you’re capable of, and you’ve got to be continuously developing your hand skills,” he said. Bitner enjoys being able to come home and keep fostering those skills, but in a way that’s totally different than during his work day. 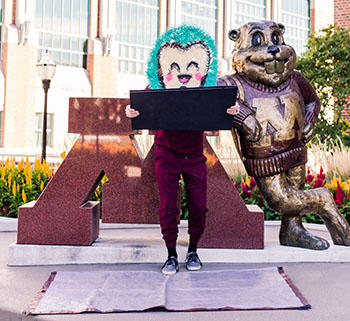 Perhaps the best part of Bitner’s new skill is how it helps him “bridge the gap between my home and my profession.” He calls rice throwing “a family affair,” explaining that his wife takes on the filming, and his kids get involved during portrait making and find new ways to play with the rice after it’s been used in a video.

“A lot of times, when people have hobbies, they go their separate way to focus on those,” Bitner said. “It’s nice to be able to do this as a family--especially during residency, when I’m often stressed or have to go to my room and study.”

Bitner’s family seems to feel the same way: recently, his four-year-old son Liam told Bitner that he wants to throw rice like his dad when he grows up. “Not be a dentist,” he laughed. “He wants to be Mr. Rice Guy. And who knows, maybe he’ll take over the account one day.”

No matter what the future holds, as Bitner enters his second year of residency in the hopes of returning to Utah as a practicing orthodontist, he’s thrilled to have his family, and the rice throwing community, by his side.

“It really touches my heart,” he said. “There are so many things this app has made possible for me and my family. I don’t know what’s going to come, but I’m excited to see who I get to meet or what I get to do next.”

See the TikTok Bitner recently made with us on campus.

Tags
Students
Research ethics at the University of Minnesota. We are committed to protecting research participants, upholding ethical standards, and improving our practice at every step of our work.