About the Dean's Circle

The School of Dentistry’s Dean’s Circle recognizes the extraordinary generosity of donors who make an annual gift of $1,000 or more to the Dental School Scholarships Fund, Dentistry Fund for Achievement, or Dental Hygiene Fund. These dedicated supporters have joined in sustained partnership with the School of Dentistry to help address the needs of our school, our students, faculty and patients, and the communities we serve.

A Dean’s Circle supporter is:

As a Dean's Circle supporter you will enjoy:

How to join the Dean's Circle

You are invited to become a Dean’s Circle member with an annual gift of $1,000 or more to the Dental School Scholarships Fund, Dentistry Fund for Achievement, Dental Hygiene Fund, or a combination of the three. Your gift can be made over the course of the year, but only donations of $1,000 or more to these funds will be eligible for membership in the Dean’s Circle. You can make a pledge of $1,000 or more and make payments on a schedule that fits your needs within the following 12 months. The pledge must be made by December 31 in a given year to be recognized in our annual donor roster.

Questions about the Dean’s Circle?

A lifetime of giving

"As good citizens, we believe it's our duty to give back to our community, whether it is through financial donations or through our time." This spirit of giving is weaved into the fabric of the daily lives of Dr. John (D.D.S. '61) and Mrs. Nadia Doroschak. Their generous involvements in the community have included, among many, providing volunteer dentistry to the children of Chernobyl, serving in the House of Delegates of the Minnesota Dental Association, and helping new immigrants establish themselves in the U.S. The School of Dentistry's Dean's Circle is yet another way they give of themselves. The Doroschaks urge, "This is one of the best investments you can make into the future of dentistry."

Dr. Doroschak notes, "My story is one of creating opportunity out of potentially trying situations." He grew up in Western Ukraine before the end of World War II. His family was displaced due to the war and they relocated to Tyrol, Austria when he was a teenager. During these disruptive years, he had the benefit of attending medical school in Innsbruck for two years as well as learning six languages: Ukrainian, Polish, Russian, German, French, and English. He reflects, "What an opportunity!"

Eventually, another opportunity came to pass that enabled him to come to the United States. Shortly after arriving in the U.S., the Korean War began, and he was drafted into the U.S. Army. Although he lost some hearing due to his time spent volunteering to be a tanker, it was a blessing as the GI Bill enabled him to further his education. He graduated with his D.D.S. degree from the School of Dentistry in 1961, married his sweetheart, Nadia in 1962, and they had four children.

The Doroschaks are grateful for the education, ongoing training and connections the School of Dentistry has provided over the years. They had the opportunity to practice dentistry in their chosen location and to stay current on key developments in the profession. For many years, they were the proud owners of a successful dental practice in Northeast Minneapolis where they served a multi-cultural immigrant community. One of their dentist sons, also a University of Minnesota School of Dentistry graduate, took over the practice and now serves the oral health care needs of this community.

Now enjoying their retirement, the Doroschaks delight in traveling globally, exercising at their local YMCA, volunteering, and spending time with their five grandchildren, to name a few activities. They also continue the tradition of giving of themselves to their community, and that includes maintaining a strong connection to the School of Dentistry. The Doroschaks remark, "We encourage all alumni to lend their support ... Every dollar is well spent to educate the best students in the world..."

Committed to the future of dentistry 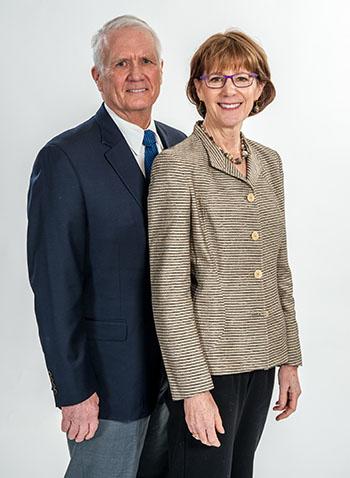 When Dean’s Circle members Bob and Laura Eng reflect upon their education at the University of Minnesota School of Dentistry, one word says it all – gratitude.

“Our lives have been very rewarding,” Laura said. “We’ve appreciated the careers we’ve had and what we’ve been able to do for our patients. I think it’s because of the quality of the dental school.” Bob agrees enthusiastically.

Laura has had a successful general practice in St. Paul. Bob, who is an orthodontist, has his own offices in both St. Paul and Mendota Heights. He is a Minnesota native; Laura grew up in Illinois. In their spare time, the Engs like to spend time at their cabin in the Brainerd Lakes area in Minnesota and to travel to visit their children and grandchildren.

Both of the Engs stay connected to the University, attending continuing education classes to remain current in their professions. In addition, Laura serves on the School of Dentistry Alumni Society Board.

They also maintain their connection to the School of Dentistry through annual philanthropy. As members of the Dean’s Circle, President’s Club, and Heritage Society, the Engs have made a long-term financial commitment to the school. “We want the school to be as good as it can possibly be,” said Bob.

“We believe our financial support enables the school to continue providing students with the highest quality education,” Laura noted. “When students graduate, they’re prepared to succeed. We also hope that in some way, it can help students lower their debt load, which can be overwhelming these days.” Bob added that it’s hard to start a practice with the debt current students accumulate. “We hope that the support provided by us and other donors improves their opportunities,” he said.

The Engs have also included the School of Dentistry in their estate planning. They consider that decision to be part of their legacy, a way they can continue to have an impact on the University beyond the length of their lives.